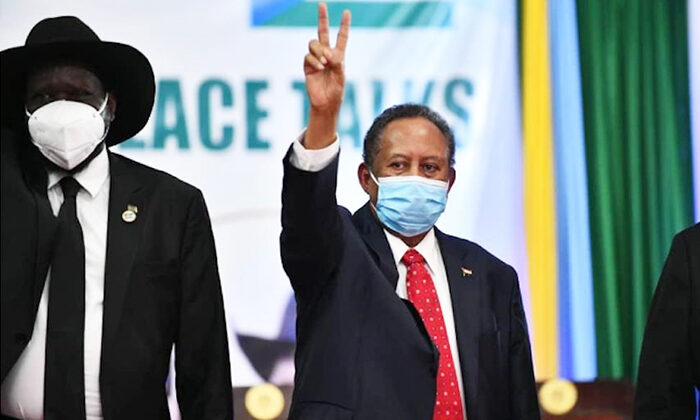 Prime Minister of Sudan, Abdullah Hamdok and the President of South Sudan, Salva Kiir, (left), after signing the agreement that ends the official status of the Islamic religion on 3 Sept, 2020./ Twitter Memri Spanish.

Sudanese Prime Minister Abdalla Hamdok and Abdel-Aziz Adam al-Hilu, the leader of the rebel SPLM-North faction, signed a declaration of principles in the Ethiopian capital, Addis Ababa, that says, “The state shall not establish an official religion. No citizen shall be discriminated against based on their religion.”

The two leaders agreed to recognize and respect the country’s diversity.

“Sudan is a multi-racial, multi-ethnic, multi-religious and multi-cultural society. Full recognition and accommodation of these diversities must be affirmed,” stated the document.

Sudan’s population of 45 million is roughly 91 percent Muslim and 6 percent Christian. Open Doors ranks Sudan at No. 7 among the 50 nations where it is hardest to be a Christian.

According to Christianity Today, the newly signed document cements Sudan’s efforts to undo the 30-year system of strict sharia law under President Omar al-Bashir, as it guarantees the rights of Christian communities in the nation’s southern regions.

Editor in chief of the online English newspaper, Khartoum Today, Mr Mohammed Ali Fazari said the agreement is an important step toward achieving lasting peace in the country.

Meanwhile, Mr Omer Ahmed al-Garay, the director general of the National Centre for Curriculum and Educational Research (NCCER), the body responsible for curricula in Sudan, recently announced inclusion of Christian education as a subject for primary schools.

It should be noted that since Sudan’s independence from the British in 1956, there have been no Christian teachers appointed by the government to teach Christianity in public schools.

School and official work operation on Sundays and other major Christian public holidays in Sudan has also been contested.

Museum of the Bible returns 5,000 artifacts to Egypt after being accused of obtaining them illegally

Magufuli: ‘God lives and He will continue to protect us’